Kenneth is a curriculum developer with NewseumED; McCormack is Vice President of Education. 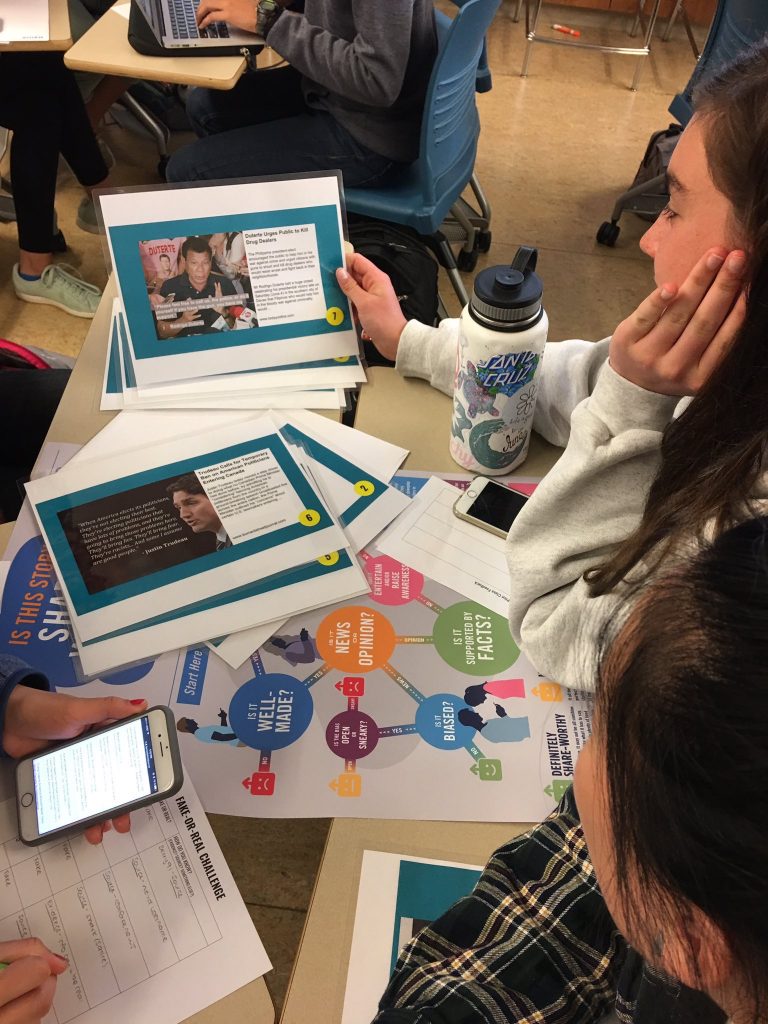 Pro tip: There’s nothing like fake news to break an awkward classroom silence. “That’s fake,” one student blurts out. “But I heard that was true,” another protests. Staring down real-life examples of phony Tweets and make-you-click headlines, students can’t help but join in the debate, and with a little guidance, they start unpacking ideas and tackling challenges that might stump many adults.

NewseumED traveled to Palo Alto, Calif., this week to pilot “Fighting Fake News,” a class developed with input from students at Palo Alto High School’s Media Arts Center. After three sessions of the class, one takeaway was clear: Students are more curious and less clueless about this topic than many give them credit for being.

As we picked apart the motivations behind fake news and got down to business sorting the real stories from the bald-faced lies, it was clear that these kids recognize the potential problems posed by fake news and are leery of being fooled. At the same time, they’re not afraid to discuss their own mistakes or shortcomings when it comes to being duped and plot a strategy to go beyond the gut check.

As one student put it at the end of the class, “By just doing a little research you can usually pretty easily determine what is real, flawed, biased or fake." Another agreed: “It’s as simple as a quick Google.”

“Fighting Fake News: How to Outsmart Trolls and Troublemakers" is designed to give participants real, accessible strategies for weeding out fake news stories and to show them it’s a problem that can be tackled as a fun challenge, not just an additional burden. The class starts by firming up the definition of fake news, not to be confused with bias, sloppy reporting or people wielding the term to try and confuse the public or discredit the media.

Students explore what motivates its creation, and how even fake news can have real world impacts, from science and public policy to elections. Finally, they learn some tips for checking out the evidence and source to figure out whether a story is fact or fiction.

The heart of the class comes when students pull out their devices to test what they’ve learned. Presented with a packet of news story excerpts and a tight deadline, they work in teams to search key facts and author names and come up with a verdict: real or fake.

Peering over students’ shoulders at the tricky examples NewseumED had selected, Palo Alto English/journalism teacher Esther Wojcicki observed that it was good for students to see that spotting fake news is hard, but not impossible.

The activity and the discussion that followed allowed students to share their process and reflect on where they’d nailed it or gone astray. Some were tripped up by a citizen journalist’s photo – they couldn’t find her name anywhere to back up her story.

Peers pointed them to other individuals’ photos and video of the same event. In another case, some felt sure that Harambe must have gotten 15,000 write-in votes for president – it just seemed so believable. Peers pointed them to a news article about just how hard it is to write in a presidential vote, making 15,000 an unlikely total.

The wide ranging examples covered topics ranging from Beyonce to the Fukushima nuclear disaster. The students had plenty of questions for NewseumED to tackle in our next media literacy projects. What happens when a reliable news source shares a fake news story? How should you respond if you find a story that’s clearly fake? How can you counter the online echo chamber effect? Ultimately, identifying fake news is just the first step in evaluating information – and deciding what to do with it.

NewseumED recently created a flowchart that maps out each step toward evaluating whether a story is share-worthy or not. When you break it down, it’s no small task, and each stop along the way will eventually be spun off into additional classes and accompanying resources. But it all starts with weeding out the fakes, and students are hungry to dig into the challenge.

"The ability to identify a reputable source is something I will need in the upcoming days/months/years."  Zach Phillips, student

Check out NewseumED's many classroom-ready materials to fight fake news and equip students with the skills to be savvy media consumers. (Content on the website is free, but may require registration to access. Sign up here.) Among the new activities: