In 1952, Time explores the effect of new technology on news after both national conventions aired on TV for the first time. (Newseum Collection) Aug. 22, 2016 Controversial. Unconventional. Crazy. There's no shortage of words that describe the 2016 presidential campaign, and most likely students would add confusing to the mix. Our newest free online resource — “Election 2016: Stumped!?” — is designed to help teachers and students put this election in context and offers tools to demystify election procedures, decode campaign messages and engage in the civic process.

"Tackling politics in the classroom is never easy," says Anna Kassinger, curriculum manager in the Newseum Education Department. "And while the constant controversies stump students, handling the content in the classroom stumps teachers. With this EDCollection, we give teachers the background and tools to dive into these controversies, instead of back away from them, and help students lead informed discussions and debates."

The multimedia collection of print and video primary sources uses an engaging case-study approach to explore a “stumped” election issue. Each of the 11 case studies includes a debate question such as “Are elections fair?” and "How has social media changed campaigns?"; an issue summary that sets the scene; election essentials that give historical and contemporary context; primary sources for illustration; guiding questions to engage in thoughtful discussion; and an extension activity.  In many cases, students may be surprised to find that today's disgust has deep roots. 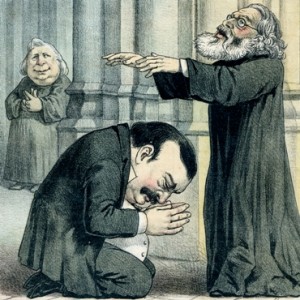 The case studies come with standards-aligned lesson plans and a worksheet for organizing evidence and developing arguments to facilitate classroom investigation and debate. Curated content is designed for middle and high school students.  (To access some of these resources, you must be signed into NewseumED; registration is free.)

In addition to the case studies, the EDCollection features several interactives:

After students are "unstumped," we encourage them to become involved in the political process. On our website, adult students can register to vote or, for those under 18, learn how to get involved in other ways in the election. "Election 2016: Stumped!?" is made possible with generous support by the American Association of University Women.

Want more tips on teaching about the election? Join us for a free National Council for the Social Studies webinar from 7-8 p.m. ET on Sept. 20. Use this link to get details and to register. You also can learn more about our election content at the Newseum's seventh annual  Fall Teacher Open House on Oct. 1 from 9 a.m. to 4 p.m.  Throughout the day there will be classes, tours and workshops to showcase all of our educational resources. Admission is free. Educators and tour operators who register in advance will be entered into a drawing for a $250 certificate to The Source, Wolfgang Puck’s famous restaurant adjacent to the Newseum.

“Making a Change” and “Women, Their Rights and Nothing Less” explore how civil rights advocates and suffragists used the powers guaranteed by the First Amendment to make their voices heard and enact change. (Both EDCollections are endorsed by the NCSS.) A third EDCollection, “Freedom in the Balance,” was launched earlier this year and uses the events of Sept. 11, 2001, to examine the fragile balance between the personal freedoms guaranteed in the First Amendment and public safety throughout history.

In the Newseum, school groups can find election material in our interactive exhibit "CNN Politics Campaign 2016: Like, Share, Elect.” In partnership with CNN, the exhibit tells the story of the 2016 presidential campaign in real time. On display through Jan. 22, 2017, the exhibit offered an immersive experience for visitors to explore the ways big data and social media have transformed how candidates campaign, how journalists cover elections and how the public participates in the political process.